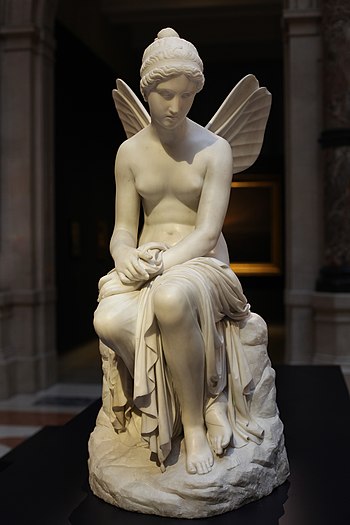 The work Psyche Abandoned by Pietro Tenerani is a beautifully crafted sculpture, which provides an interesting look into both the neoclassical movement, and the later Purismo style in which, Tenerani was known for. While the work itself is a wonderful example of the neoclassical style, Tenerani himself was a major proponent of the Purismo movement, which rejected the ideals of Neoclassicm and sought to emulate medieval visual aesthetic. This juxtaposition between art and artist provides the modern viewer with an interesting look into the world of 19th century techniques.

Like so many of his contemporaries, Tenerani began his career as a neoclassical sculptor and often depicted scenes from ancient Greek or Roman sources. He started working in Carrara, in 1803, where he trained under Lorenzo Bartolini, a famed neoclassical artist, at the Academia di Belle Arte.[1] In 1813 Tenerani won a scholarship to continue his studies in Rome and upon moving there, gained acclaim by winning the Premio dell’Anonimo, a competition instituted by the talented Antonio Canova.[2] Sometime in the year 1815, he began work in the studio of Bertel Thorvaldsen at the Piazza Barberini and produced his famous work Psyche Abandoned in the neoclassical style. This particular style coincided with the widespread interest in the Classical past of Greece and Rome. Though never having seen classical art, Johann Winckelmann, often considered the father of art history, generalized that the “prominent characteristic of Greek masterpieces is the noble simplicity and quiet grandeur in posture as well as expression”. He further explained that, “Just as the depths of the sea remain calm despite surface waves, similarly the expression of Greek sculptures show a noble and steady soul beneath all suffering”.[3] It is this sense of calmness embodied in both Greek and Roman sculpture that neoclassical artists try to capture in their work.

Inspiration for topics often came from the surviving texts of Roman poets such as Publius Ovidius Naso and Apuleius. The myths, as depicted by these poets, were used to explore the depth of the human spirit and complexity of emotion. Often, the myth would center around a change, such as the nymph Daphne turning into a tree, or a conflict, like the tension between Venus and Psyche. The preserved stories of Greece and Rome were often the basis of inspiration for many neoclassical artists. The myth of Psyche and Cupid appears in many pieces, such as Antonio Canova’s Psyche Revived by Cupid’s Kiss[4] of 1793and François Gérard’s Psyche and Amor of 1798,[5] which utilize the canonized story to explore the inner emotions and desires of the human soul. The myth, as told in The Metamorphoses of Apuleius, explores the love between Psyche, the youngest daughter of an unspecified king, and Cupid, the Roman god of love and desire. Psyche possessed such beauty that she won over the heart of love, himself. Cupid, smitten by the young beauty, secreted her in a palace far from her family and out of the reach of his mother, Venus. He wed the young princess and visited her nightly, with the command that she must never look upon his face. Being lonely, Psyche visited her sisters who had been incited to jealousy by Venus. They managed to convince Psyche that she wed a monster and that she must see his face to ascertain the truth. Moved by her sisters and frightened of the truth, Psyche returned to the palace where she lit a lantern over Cupid in his sleep in order to see his face. Startled awake, Cupid immediately left her side and stopped just long enough to exclaim that love could not dwell with suspicion and that her punishment for such an act was to be parted from her one true love.[6] The myth continues with an elaborate story of Psyche searching for a way to be reunited with her beloved. Tenerani, however, was concerned with the exact moment of Psyche’s abandonment. In his precise representation, Tenerani explores the realization of truth and the moment of heartbreak. Psyche Abandoned is a pure embodiment of emotion, a perfect example of the use of ancient myth to explore the human soul, and above all, is a true representation of how Johann Winckelmann described Greek art, as showing a “steady and noble soul beneath all suffering”.[7]

Psyche Abandoned, while a good example of neoclassical art, is primarily known for launching Tenerani’s career into the international market, and is often referred to as Tenerani’s ‘first’ psyche.[8] Even in the early part of its existence, people knew of the splendor of this piece and vied for their own masterpiece by Tenerani. The precision and beauty instilled in the work drew the attention of important patrons from all over Europe, and as such, grew in demand. To appease all the interest, Tenerani based several replicas on it. Prince Metterniche wished to buy the Psyche, but, since it was already promised to Machesa Lenzoni, he had to settle for a copy of the Psyche Abandoned. Copies were also made for the banker Labouchère, Prince Esterházy, and Lord Thorvendson.[9] The artist also made a variant of the Psyche for General Augustin Bertinde Veaux as well as the famous Psyche Fainted for the Prince Khristofor Lieven of Russia in 1838. In total, it is estimated that there were twelve copies or variants of the Psyche made by Tenerani throughout his career with several in different museum collections across Europe today. The ‘first’ psyche came into the possession of the Galleria dell’arte moderna at the Pitti Palace following the will of Marchesa Lenzoni. This stipulated that the collection of pieces by Tenerani be given over to the gallery only after the death of Lenzoni’s last male heir.

The series of Psyche statues produced by Tenerani stands in direct opposition with his later works. While his career began in the neoclassical style, Tenerani’s was drawn into the Purismo movement and was largely influenced by it. This movement idealized the works of Raphael, Fra Angelico, and Giotto, and advocated a return to the spiritual and aesthetic values of the early Renaissance.[10] As such, the art of Pietro Tenerani’s late career does not derive its source from classical themes, but rather more Christian ideals. He was commissioned to work on several churches in Rome as well as tombs and other monuments. In Rome, Tenerani held several important positions in the art world, including president of the Accademia di San Luca, as well as the presidency of the Musei Capotilini and the directorship of the Musei e Gallerie Pontificie at the Vatican. The study of Tenerani himself can provide a brief history of the art movements that went through Italy, and more specifically, Florence and Rome during the first half of the 19th century.

Winckelmann, Johann Joachim, Reflections On The Painting And Sculpture Of The Greeks: With   Instructions For The Connoisseur, And An Essay On Grace In Works Of Art           (London,1765)

[3] Johann Joachim Winckelmann, Reflections On The Painting And Sculpture Of The Greeks: With      Instructions For The Connoisseur, And An Essay On Grace In Works Of Art (London, 1765).